From a Designer: 7 Tips for Great Kitchen Lighting

For many people, the kitchen is the hub of the home these days.

“That’s why it has to be functional, comfortable—and tied together with the right lighting,” says San Francisco–based interior designer April Powers. With more than 20 years in the industry, Powers’ contemporary-yet-timeless design work includes custom, high-end residences, restaurants, boutique inns and more, and has been featured in Architectural Digest and other publications.

We tapped her expertise to round up seven essential tips on how to light a kitchen—below, her rules to live and cook by:

1. The kitchen has become more than just a space for food prep.

Whether you’re throwing a party or just entertaining a few guests, everyone ends up hanging out in the kitchen. “It’s important that the lighting is both task-oriented as well as ambient and friendly” says Powers. “Avoid anything overly bright.” Plus, this all-important touch: “All fixtures should be dimmable so the light can be adjusted to meet specific needs—since so many kitchens are located directly off a great room, it’s nice to be able to lower the lighting levels once the food prep is done.”

2. Obey the rule of 3 levels of light: Down lights, under-cabinet lights and pendant lights.

To achieve that proper mix of task and ambient lighting, you’ll want to light at different levels: down lights (also called recessed), under-cabinet strip lighting, and hanging lighting. “Wattage can vary based on the space, but typically, MR16 Halogens or LED lamps are used in the recessed fixtures, LEDs for strip lights, and incandescents for pendants.” As for bulb color temperature Powers usually opts for warm, golden tones.

3. Recessed lighting is your friend.

Recessed lighting in the ceiling is best for general room illumination and combats glare and shadows. Its especially useful in hard-to-light and transitional areas.

“I like the Tesla 2” High Output LED 0-30 degree Adjustable Reflector because it has a small aperture so you’re not punching an enormous hole in the ceiling” says Powers. They can also be used in transitional areas and areas of circulation, like walkways, and the space between the island and kitchen sink.” Plus they’re great for task lighting high-use areas. 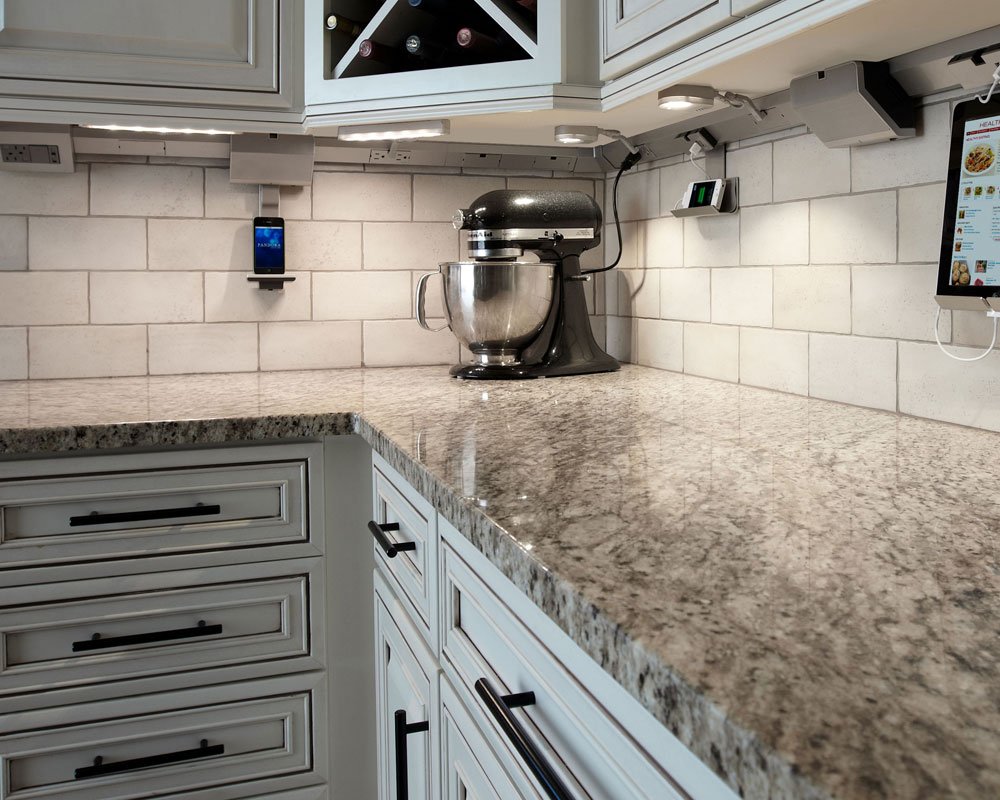 AP: For task lighting over countertops, Powers often uses LED strip lights. They’re typically mounted behind the fascia board at the front of the cabinet, so they’re hidden from view and not shining in anyone’s eyes, but the light is directed down on to the counter. For the ultimate in under cabinet systems Powers suggests Legrand’s Adorne Collection, which allows you to hide outlets and USB ports as well as light your counter. 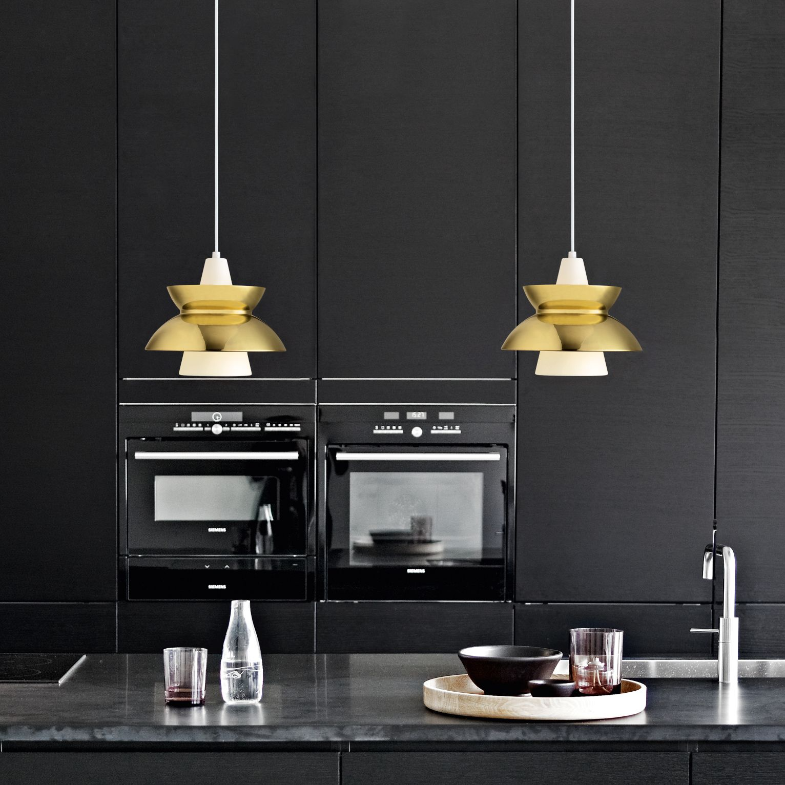 5. Pendant lights should hang about 40 inches above an island or table.

“[Pendant lights] provide light at a lower level in the room than recessed ceiling fixtures, which allows for more balanced overall lighting and some stylistic and visual interest,” Powers says. She prefers pendants to hang “approximately 40 inches above the island or tabletop so they’re not in the sight line of the average person standing or sitting in the space.” Powers says a good option for the dining area is a dark drum pendant, which will direct the light more specifically onto the table surface and the ceiling above. “It creates a more moody effect than a typical fixture that glows from all sides.”

6. If your kitchen is already flooded with light, focus on accent lighting and consider open shelving.

If you’re lucky enough to already have a well-lit kitchen, “one idea is to float shelves, use open cabinets, or cabinets with glass doors, and mount LED strip lights in the back of the shelves” says Powers. “This creates a wash of light at the back cabinet wall that highlights the objects on the shelves.” 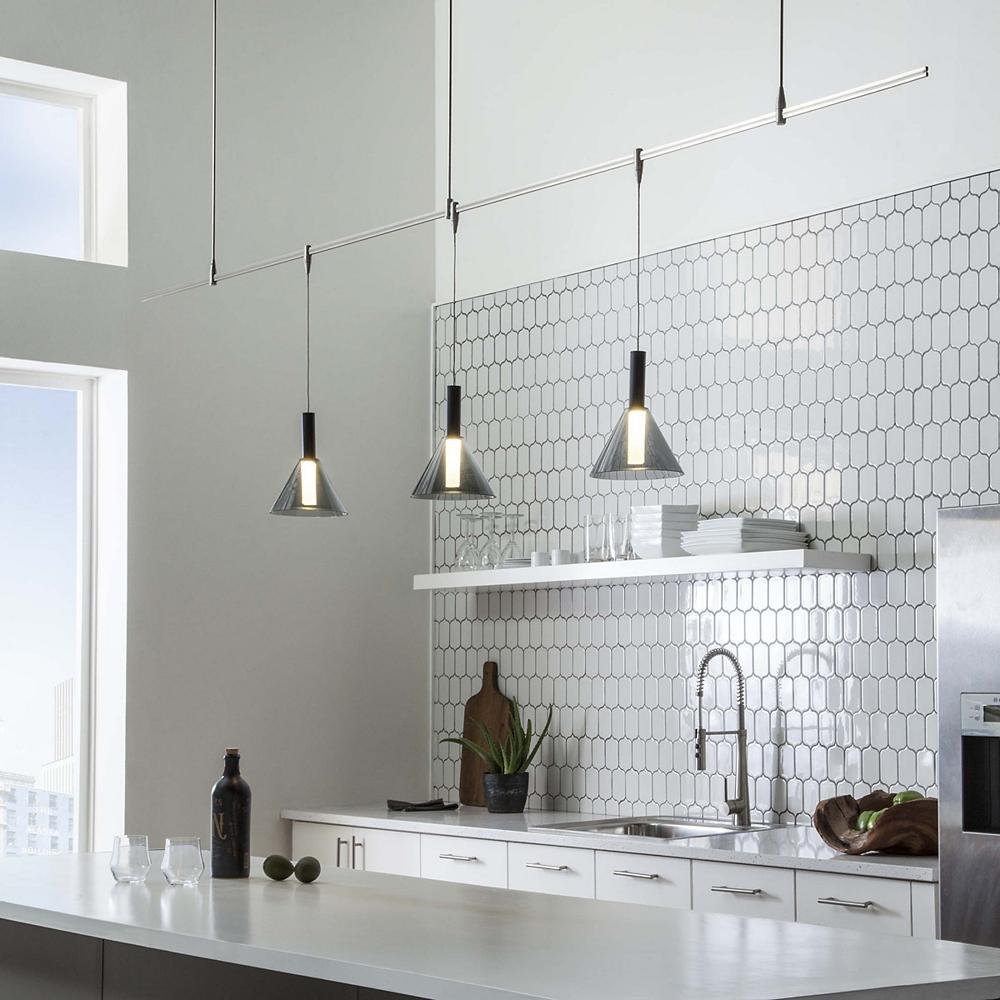 7. When it comes to hanging lights from the ceiling, less is more.

Powers kitchen lighting pet peeve is too many lights hanging from the ceiling. “I typically tend towards having only one hanging-style fixture in the kitchen, whether it’s a pendant over an island or eating area, or a pot rack with integral down-lights over an island or cooking area.” She prefers an either/or approach, as two competing hanging lights leave the ceiling plane feeling cluttered.

For more from April Powers and team, visit aprilpowers.com

Team Y is a dedicated group of design devotees. We love everything that has to do with modern design, from products like lighting, furniture and decor all the way to interior design, architecture and city planning. What inspired the design? How does it work? What does it mean? We want to know. And once we know, we are constantly inspired to share what we've discovered with others who love design as well. That's Y.

On Our Radar: Pantone 2020 Color of the Year, Classic Blue