Artemide was founded in 1959 by Ernesto Gismondi, and the Milan-based company has collaborated with the world’s most talented designers to create numerous iconic modern designs, many of which reside in the permanent collections of museums around the world.

As luck would have it, just a few towns away in the same decade, Michele De Lucchi was born in 1951 in Ferrara. He went on to study architecture in Florence and during a period of radical and experimental architecture in Italy, he was a prominent figure in movements like Cavart, Alchimia and Memphis.

The two icons of Italian design seemed destined to collaborate and it happened in 1987, when De Lucchi designed the Tolomeo lamp for Artemide. The lamp is now available in sizes from mini to mega, indoor and outdoor, and is arguably Artemide’s most iconic fixture.

Having a background in architecture and industrial design, De Lucchi also favors a craftsman-like approach, stating “I designed the Tolomeo in 1987. Perhaps I ought to say that I invented it, as in point of fact the idea for a new mechanism came before the lamp was created.”

De Lucchi has designed lamps and furniture for iconic Italian and European design companies, such as Artemide, as well as buildings and architectural projects around the world. His professional work has always gone side-by-side with a personal exploration of design, technology and crafts. In 2000 he was appointed Officer of Italian Republic by President Ciampi, for services to design and architecture.

Here is the story of the how the Tolomeo came to fruition. 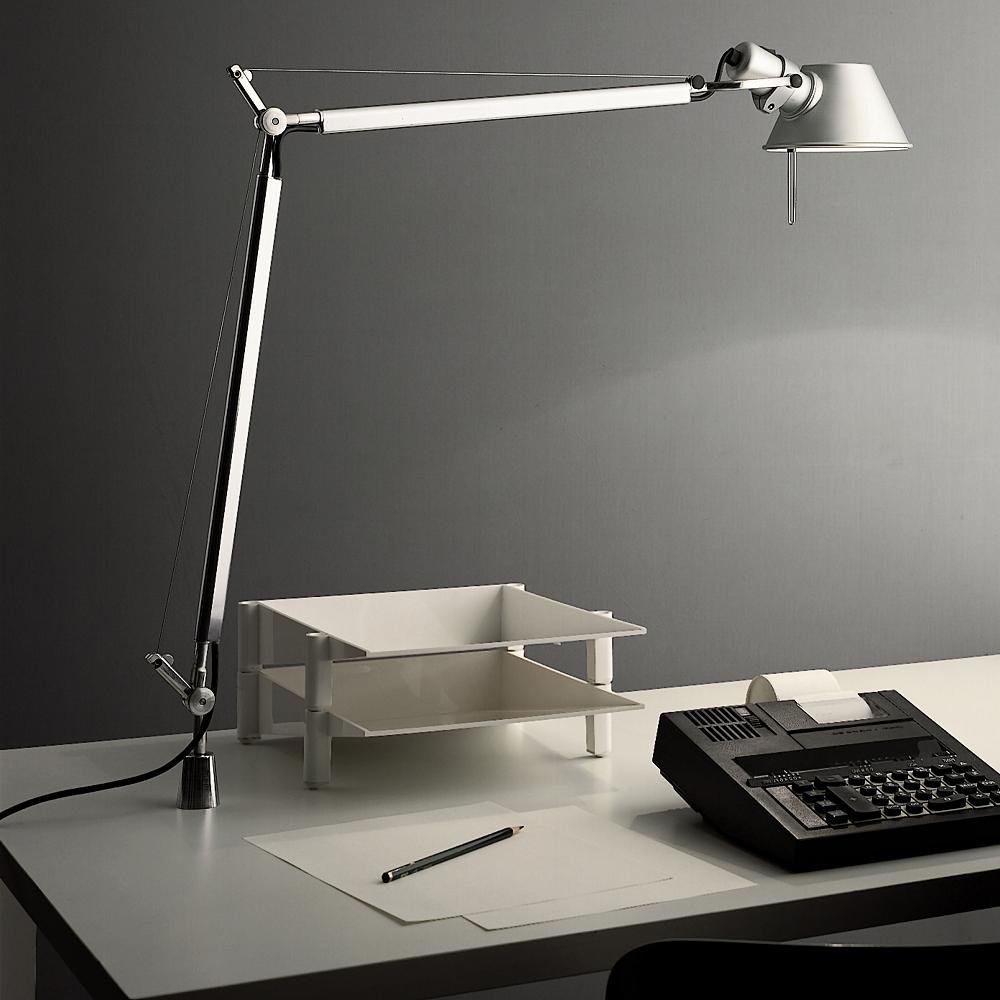 It All Started with a Table Lamp
Introduced in 1987 and designed for Artemide by Michele De Lucchi with Giancarlo Fassina, the Tolomeo was an immediate bestseller, consolidating a working relationship that continues to this day. Inspired by traditional balanced arm lamps like the famous Naska Loris, his challenge was to combine an iconic and “domestic” form with innovative technologies and materials, adapting it to a wide variety of uses and settings. Today it is a well-known symbol of the modern object, commonly seen in houses, offices and hotels, on the desks of architects and on photographic and even film sets. The iconic desk lamp has been seen in films and TV series on the desk of iconic characters like M in the James Bond Series.

The first table version has multiplied over the years into an endless range of variations including floor, suspension, and wall models in both indoor and outdoor collections. Winner of the Compasso d’Oro award in 1989, it quickly became an icon of design and the aura surrounding it never seems to fade.

Inspired By Fishermen and Greek Astronomy
The Tolomeo lamp was born from a desire to have a lamp De Lucchi personally designed on his desk that would work over his drawing board, where he spent many hours a day. De Lucchi wanted to have a very simple design for the Tolomeo. The lamp is made without screws and is held together by tension produced by the string inside. The name Tolomeo [Ptolemy] seemed the most suitable figure to represent the lamp, because he was an astronomer, a mathematician; in short it was the name best suited to the idea of a scientific mentality.

“There was a very simple reason for the choice of a spring mechanism for the Tolomeo: I wanted to make a lamp that would work with incandescent bulbs and not just with halogen ones. The Tizio, designed by Artemide in 1972 by Richard Sapper, had no wire, whereas I had the problem of having to run a wire through it. I didn’t want the wire to be visible, but to be integrated into the lamp. Once there was a tube to conceal the wire, it could also conceal the spring, so I looked for a mechanism that would fit completely into this little tube. In reality the idea for the mechanism came from watching anglers fishing with a line. When an angler uses a fishing line he always has to support the tip of the rod. That is true, for example, of the trabucchi, those old fishing machines used mostly in Puglia in which the arms that support the net are held by a series of ropes. It seemed a clever idea to use a small lever arm and a length of wire to suspend a rod to which something could be attached. That was what I had in mind when I designed the Tolomeo.”

The Legacy of the Tolomeo Design

Michele De Lucchi and Artemide’s collaboration has continued from the first Tolomeo lamp in 1987 to today, working with new technologies and design environment to develop new products.

Michele De Lucchi: “Tolomeo was a great success from the very first year, with the result that Artemide decided to invest a lot in the system of production. Today there is a whole factory devoted exclusively to the Tolomeo that turns out around half a million lamps a year.” 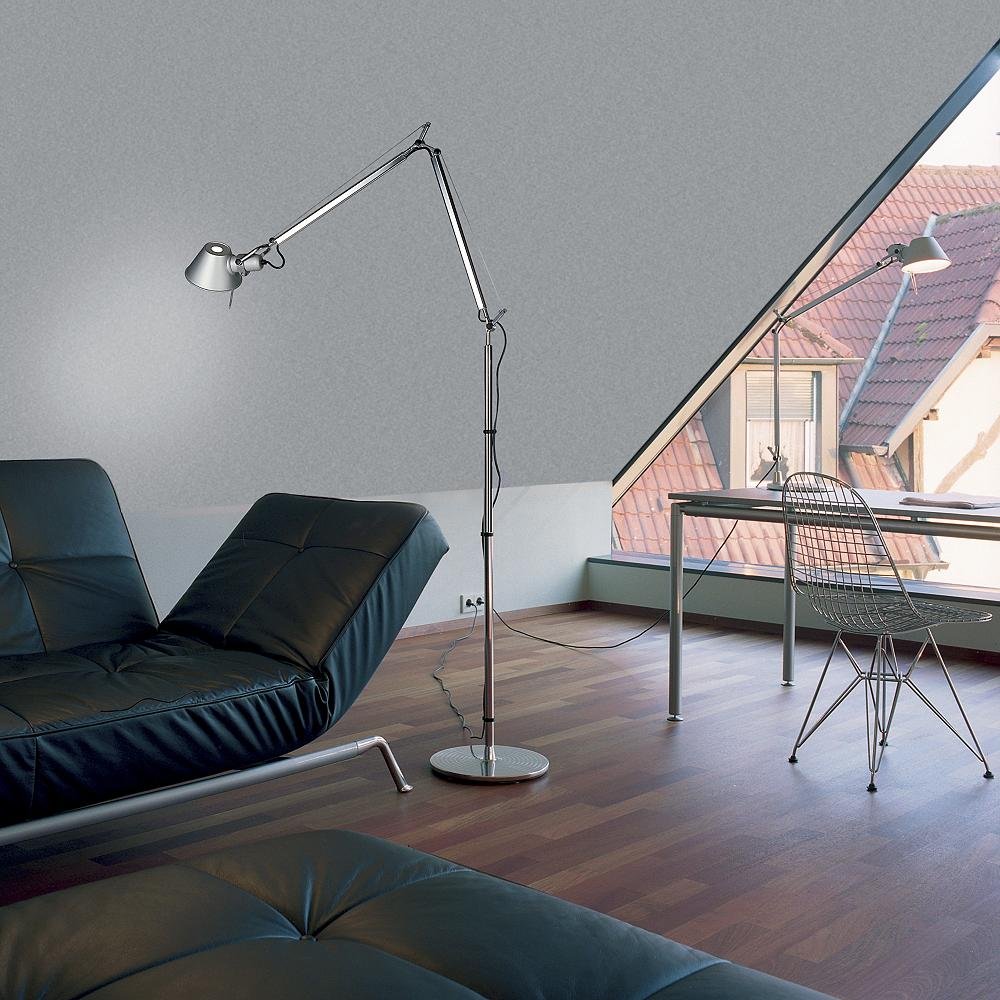 “I’d say that rather than a lamp Tolomeo is a formula, a philosophy of the product. One of the aspects that has guaranteed its success is that each of its components can be turned into a lamp in its own right; for example the head by itself, with a clamp or hung from the ceiling, becomes many other lamps. It was undoubtedly a big step when we designed heads in the form of lampshades made of paper or fabric. This version made it better suited to household use and adaptable to different settings. In general it’s a lamp that has a very pliable personality. It can be used in offices but also in homes, and this flexibility is one of the reasons for its popularity. It’s a product that fits perfectly well into both traditional and classic settings and innovative and unconventional ones. It is available in different forms, for the table, the floor, the ceiling, the wall. You can put it anywhere and you can move it easily.”

“In recent years lighting technology has undergone a radical modification. Not only has the light source been replaced, but the whole mode of its conception has changed. And this is precisely what makes it so surprising and almost miraculous that the Tolomeo has been able to adapt to these changes. Originally it was designed for the traditional incandescent bulb, but then we made numerous other versions, with halogen, gas discharge, energy-efficient bulbs, compact fluorescent bulbs with long tubes, etc. As light sources emerged that seemed to have potential, we tried to adapt the head of the lamp to the new kind. The latest is undoubtedly the LED bulb, which produces highly concentrated and direct light, and it was not easy to find a diffuser that would distribute the light correctly. With LEDs the starting point for the design of a lamp is no longer the bulb, but the effect of the light in space.” 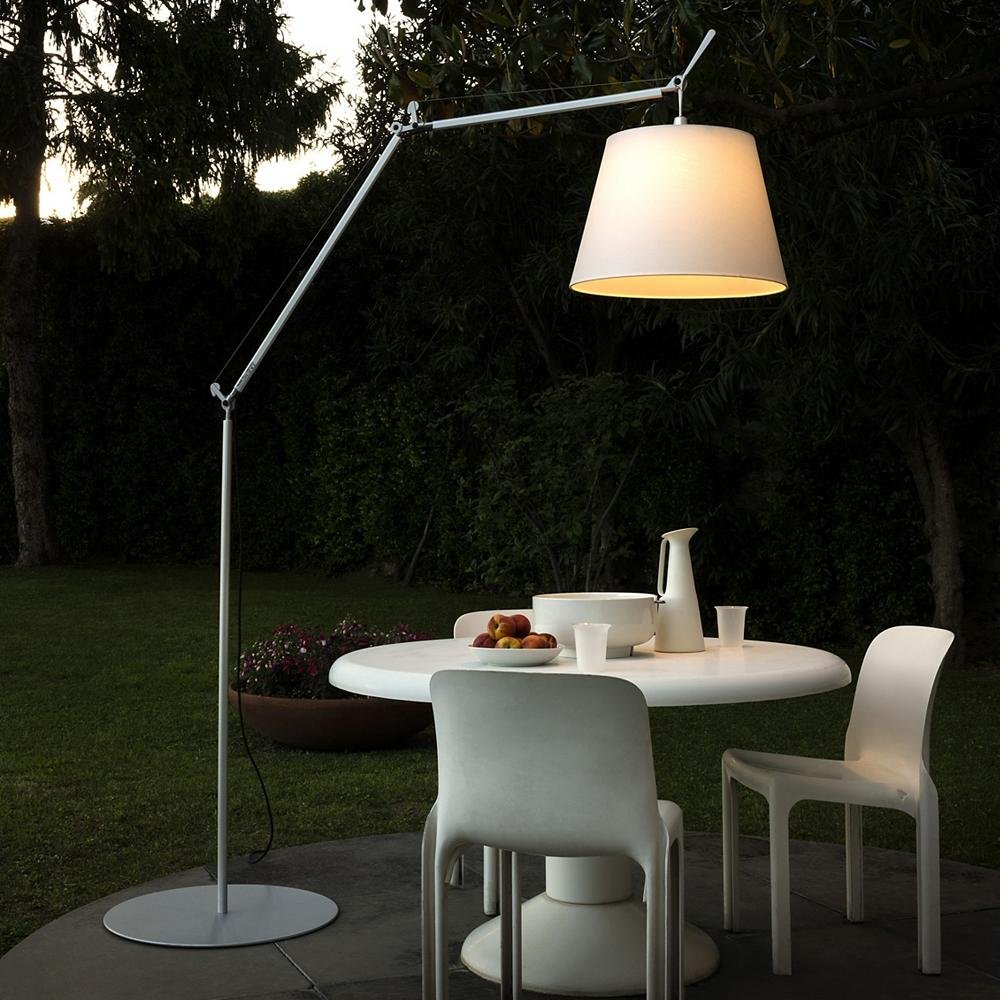 The Latest Tolomeo Collection: Outdoor Lighting
The most recent additions to the Tolomeo Collection have been a full outdoor series including both ground and suspension lamps. The ground lamps feature the same flexible arm and diffuser as the original table lamp, but on a march larger scale and with a large, weatherproof diffuser. The Tolomeo Lantern series keeps many of the familiar features of the original, but with an updated vintage lantern as a diffuser.

The Tolomeo collection features a lamp for every design need: the classic table lamp comes in a range of colors and bases to work with any desk, either at home or in the office. Floor lamps are available with a classic diffuser for a focused reading light, or with a large parchment diffuser in a “mega” size, adding contemporary style to any space. Wall spots are available as well as wall lamps with a flexible arm, perfect as a bedside lamp. Tolomeo Suspension fixtures come with or without a parchment shade, in unique off-center configurations. No matter the occasion, there is a Tolomeo to suit your space.