Lee Broom is working at the speed of light.

While the design world descends upon Milan this week to unveil their latest grandiose creations for the world to see for the first time, Lee Broom is already two weeks ahead of the game.

And we caught up with Broom fresh off his flight back from Australia, where he’d just unveiled his latest collection in an exhibition that transformed 4,000 square feet of industrial parking into a modern-age pleasure garden dubbed “Park Life.” In our latest Meet the Makers, the multi-hyphenate creative talks about his inspiration, design process and whether or not he believes in extraterrestrial life.

How did you get into design? We read somewhere that your first creative endeavor as a child was acting. What led you to becoming the renowned designer you are now?

I originally trained as an actor and was a professional child actor until I was 17 so my original career path wasn’t design at all. I performed in many theatrical shows and did TV and radio work. I was a member of the Royal Shakespeare company at the age of nine, so this was a career I planned to pursue well into my adulthood. However, I also loved design, and my dad was an artist and taught me how to draw, so I was always sketching and drawing when I was younger. I particularly liked architecture and also fashion. When I was 17 I entered a fashion competition called The Young Designer of The Year Award, which was judged by Vivienne Westwood, and I was fortunate enough to win. This then led to me working for her in London and Paris for around 10 months before going on to study fashion design at Central Saint Martins, which is one of the best schools in the world to study fashion.

Although my main focus was fashion, I also had a passion for interiors, so while living in London as a student, to support myself I would go into independent, underground bars in London and ask if they needed help with their interiors, such as upholstery or curtain making. I used to make mirror frames and would customize lighting objects and would decorate the venues to enhance the spaces. This cemented an organic move into interiors, which very soon turned into a small business.

Just after graduation in 2000 I was commissioned along with my friend and colleague from Central St Martins called Maki, to design a venue from scratch. It was a 9-month long project to design the whole interior for what was to become London bar ‘Nylon’. The venue became hugely successful and the project was nominated for the Evening Standard Bar of the Year Award and so we set up an interior design practice called Makilee Design which created interiors for independent bars across London.

At that point I still thought I would go into fashion, but I loved creating interiors and this gave me an opportunity to set up my own brand, which was always the main goal. We did this very successfully for around four years. After my partner Maki moved back to Japan in 2006, I decided to launch a new company under my own name in 2007. As well as designing interiors, I launched the brand with a furniture and lighting collection, which became very successful very quickly. I have continued to produce collections every year since then. 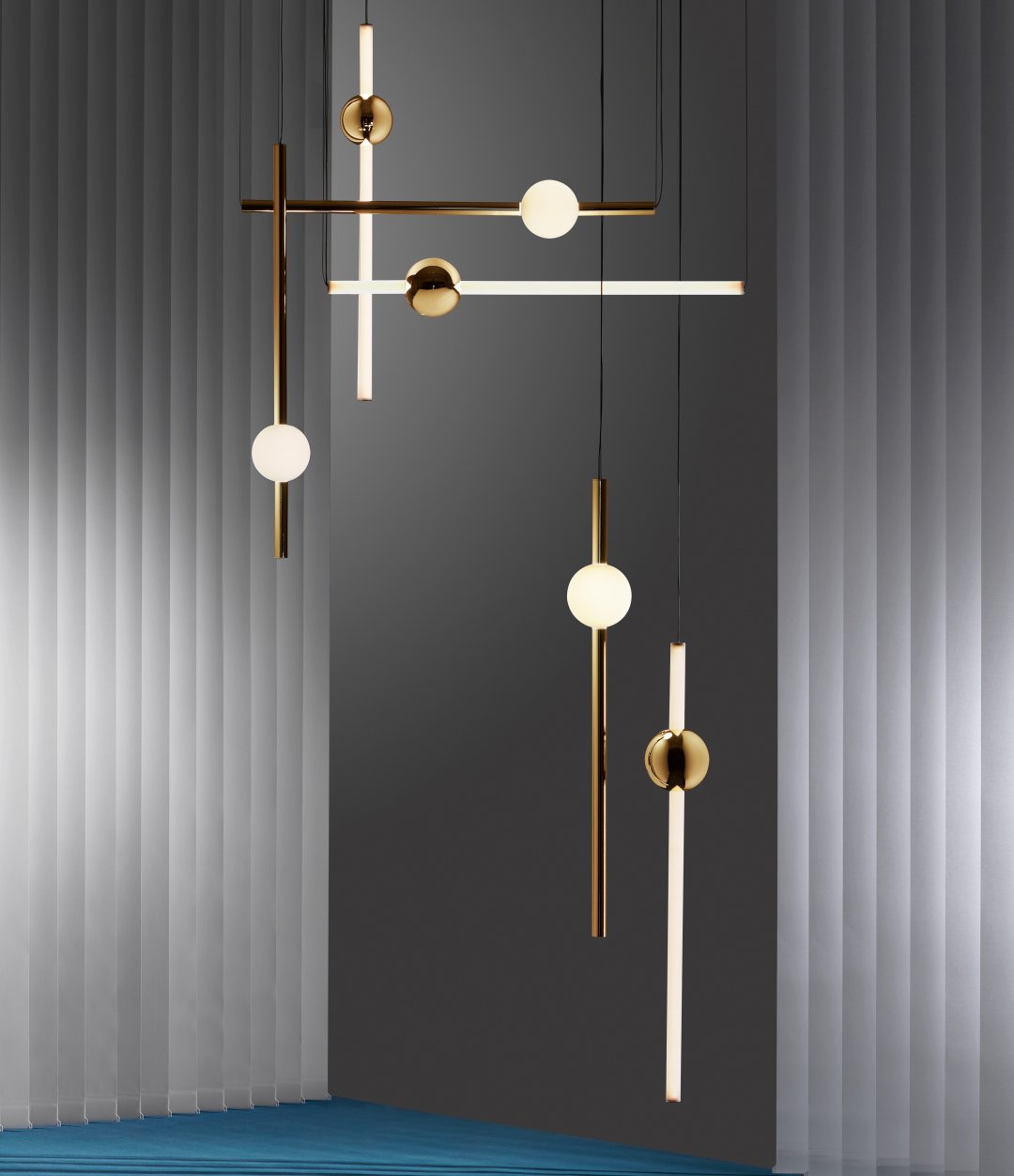 So, what makes for good lighting in a restaurant or bar—and what can be applied to a home bar, or dining room even?

Lighting is so important to an interior space, it can be a focal point or it can be a subtle part of the whole scheme, and it can change the ambiance in a room making it tonally warm or cool. It can help bring a room together or help create separation. The right lighting is vital whatever outcome you are looking for within the space. I often design my interiors focusing on the lighting first rather than at the end. It shouldn’t be an afterthought. When I was designing interiors for restaurants, we would always go big, making the lighting the main statement. Scale is so important, and I always urge people to consider this even when choosing lighting for the home. Go big, even in a small space.

What is your design process? Does it start in the studio, or does inspiration strike you in unexpected ways?

I sketch a lot and collate images all of the time. I’m never without my sketchbook so I have a library of designs. It is difficult to pin point one particular thing as I am inspired by lots of things. I have a photographic memory for anything visual so if I see something interesting I store it away in my memory and then tap into it later on. I pick inspiration up all the time, just by walking around the city, travelling the world, seeing architecture, going to galleries or even visiting factories where I make my products.

I think the crossover between my different design disciplines, my theatre background in particular, has a subconscious influence on my work, especially when it comes to our exhibitions. I’m still very passionate about fashion too, even though I am no longer in that industry and I like looking at what people are wearing. I’m also inspired by materials and manufacturing techniques and how I can utilize the traditional in new and innovative ways, striking the balance between modernism and nostalgia, re-imagining silhouettes and playing with form and shape.

And then how does something go from an idea to a design to an actual product?

Once I am happy with a sketch or an idea and know that in principle it can be produced, I give it to my visualizer to create a computer generated visual of the product. This allows me to get a clear idea of the materials and the scale. After this I will then develop it together with my design and production teams. It then becomes a 12-month period of creating models, prototypes and solving endless design problems. All of this in the pursuit of creating something that is functional while staying faithful to my original vision. Each aspect in the development phase of creating a product gives me the opportunity to constantly evolve. We’re always experimenting with new materials and new styles in the studio which also makes it exciting for people who like my work, as they never know what to expect next. Sounds like you’re just wrapping up a bit of world tour of lighting exhibition—you were in Singapore and Australia. Can you tell us about the project?

We are just back from Sydney, Australia, where we presented a landmark exhibition called Park Life, which was set in an underground car park. The 4,000 square feet presentation is the largest show we have created to date, and so it was incredibly exciting. We partnered with Space Furniture and their industrial car park was transformed with a contemporary interpretation of a traditional garden park. The installation took the form of a maze, which guides guests on a poetic journey of discovery through hidden passageways, featuring 16 tableaus and vignettes showcasing over 100 of our lighting pieces.

The exhibition was inspired by the pleasure gardens of the 18th century, which were laid out with mazes and miniature waterways. These were the places to be seen and to see the latest in art, architecture, music and illuminations. In the same way that visitors were entertained in pleasure gardens centuries ago, I wanted to create a sense of escapism, amusement and drama for which my shows are best-known for. We had thousands of visitors but we were also aware that the presentation was on the other side of the world, so we created a beautiful short film of the whole experience which gives you a real essence of being there.

Do you have a favorite lighting piece you’ve designed? Or one that is most dear to your heart?

Anything that’s new tends to be a favorite. I am very proud of my Observatory collection which toured the United States last year. As well as being luxury and classic, it is also technically innovative, with concealed LEDs creating diffused halos of light. I also wanted to respond to designers and architects who specify a lot of our products for their projects with this collection. We have a lot of customers who want something unique or something bespoke from us. It can be tricky to satisfy all these types of requests so with this collection, and in particular the Orion Light, I wanted the end user to be able to create their own constellations of light with just two products. It comprises simple modular lights with opposing opaque and solid polished gold spheres along with opaque and solid polished gold tubes. These connect and expand horizontally and vertically to create bespoke installations with infinite adaptations. It has been very successful because every installation and project has the opportunity to be completely unique. And although very commercial, the collection is quite mesmerising giving both a visual and emotional response. 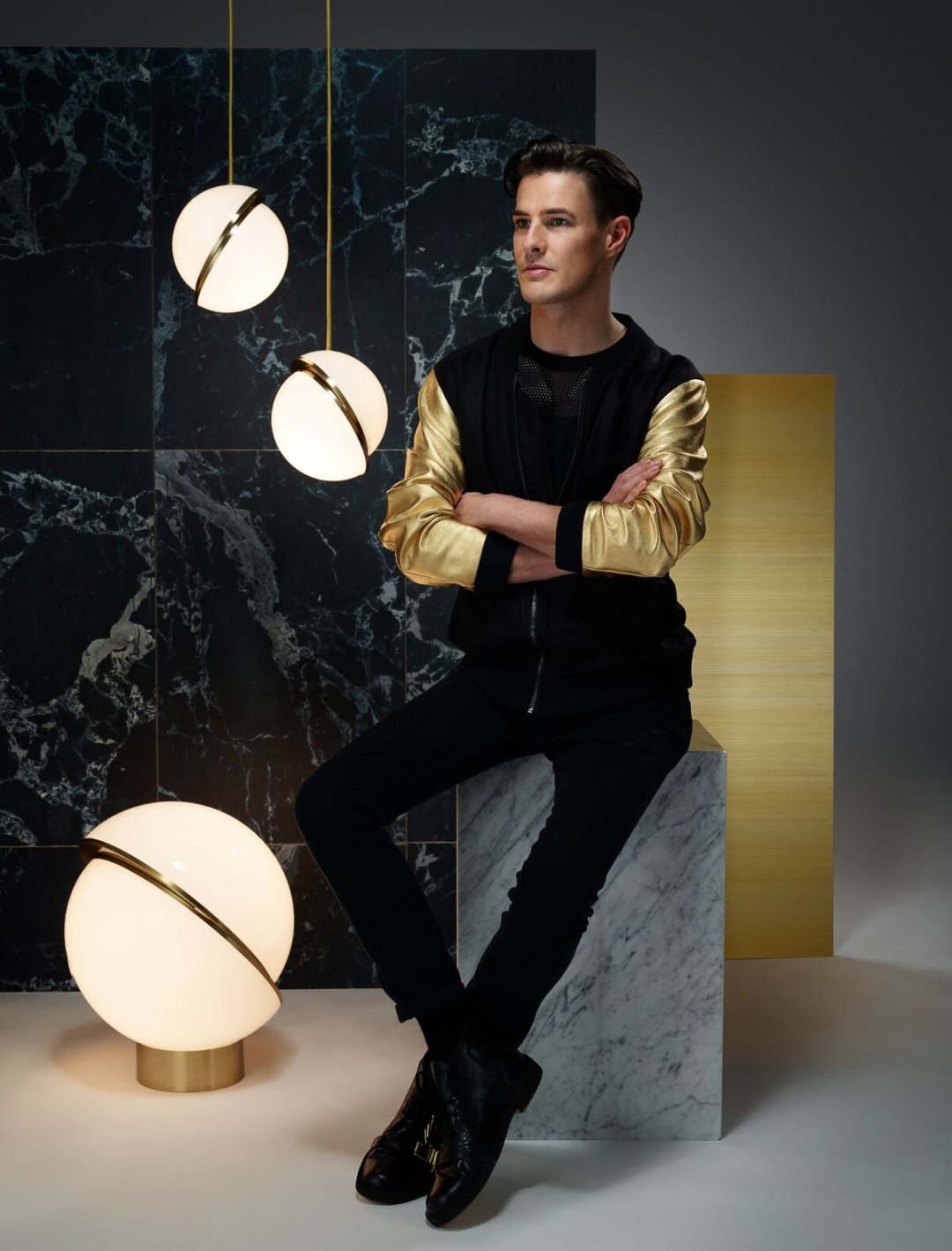 Between the Crescent, Eclipse and Orion collections, it would seem you’ve been staring at the cosmos a lot lately, can you tell us about these collections.
That was really the start of thinking about the idea of creating constellations. It was on a visit to a friend in the countryside that I found the inspiration initially. I am a city boy, brought up in the Midlands and living in London for the past 25 years, so had never really experienced that intense blanket of stars that you find on a beautiful, clear night in the countryside, with the constellations so clearly marked. That was what gave me the idea for the celestial theme, but with a loose interpretation of stellar and solar qualities. As well as the constellations theme, these designs are centered on the reflection and refraction of light.

…and whether or not you believe there might be other life forms out there, in the universe…?
Absolutely, how can there not be?

What can we look forward to in your latest designs?
This year we are focused on elevating the Observatory range with varying finishes and creating other versions that expand on the collection. We are also working on new lighting pieces for release next year and some home accessories also.

Najib chooses to see the good in every design—from Rococo, to Bauhaus, to, yes, even the Memphis Group—but he always keeps coming back to those sweet, sweet, clean lines and studied minimalism of modern design. As Content Marketing Manager, he’s only content when creating content.