Achille Castiglioni was an influential Italian designer who greatly influenced the language of modern design. In 1944 he launched his studio in Milan alongside his brother Pier Giacomo Castiglioni. The brothers’ collaboration resulted in several award-winning, iconic modern designs throughout their careers for influential Italian brands like Alessi, FLOS, Zanotta, Kartell and Moroso.

Dedicated to creating technically innovative designs that were also visually appealing, the Castiglioni brothers frequently experimented with new materials. By taking these new materials beyond their original purpose, their designs were truly unexpected and unique.

In addition to their experimentation with new materials and production processes, Castiglioni designs incorporated inspiration from the world around them and often included a touch of wit and humor. Launching many of their designs from found components, some of their most recognizable designs used familiar forms in an unexpected context.

No product embodies their lively sense of paradoxes and humor as much as the Snoopy Lamp, which the pair created for FLOS Lighting. Inspired by the famous Snoopy character created by Charles Schulz in 1950 for his Peanuts cartoon strip, the Snoopy Lamp certainly brings a touch of humor to lighting modern spaces.

The essential graphic shapes that make up the drawn cartoon character are evident in the lamp design. The minimal lamp is defined by an oblong reflector with three cooling holes that call to mind Snoopy’s snout and the shape of his head. (Many have also likened the cooling holes to those found in bowling ball grips, which was certainly a popular pastime in the 1960s.)

The slightly off-kilter base visually and literally balances the angled shade. It is crafted from beautiful marble and a glass disc, which both supports the shade and diffuses the light across the surface. The on/off switch incorporated an electronic dimmer which, at that time, was a highly innovative component. Each element of the Castiglionis’ design beautifully embodies their wit and desire to inject a little fun into common everyday objects.

This year, in honor of Achille Castiglioni’s 100th birthday and the Snoopy Lamp’s 50th, FLOS has released 1,700 numbered, limited edition Snoopy Lamps. A chance to own an iconic modern design, the special edition Snoopy Lamp incorporates a few small changes without losing an ounce of its original humor and style. 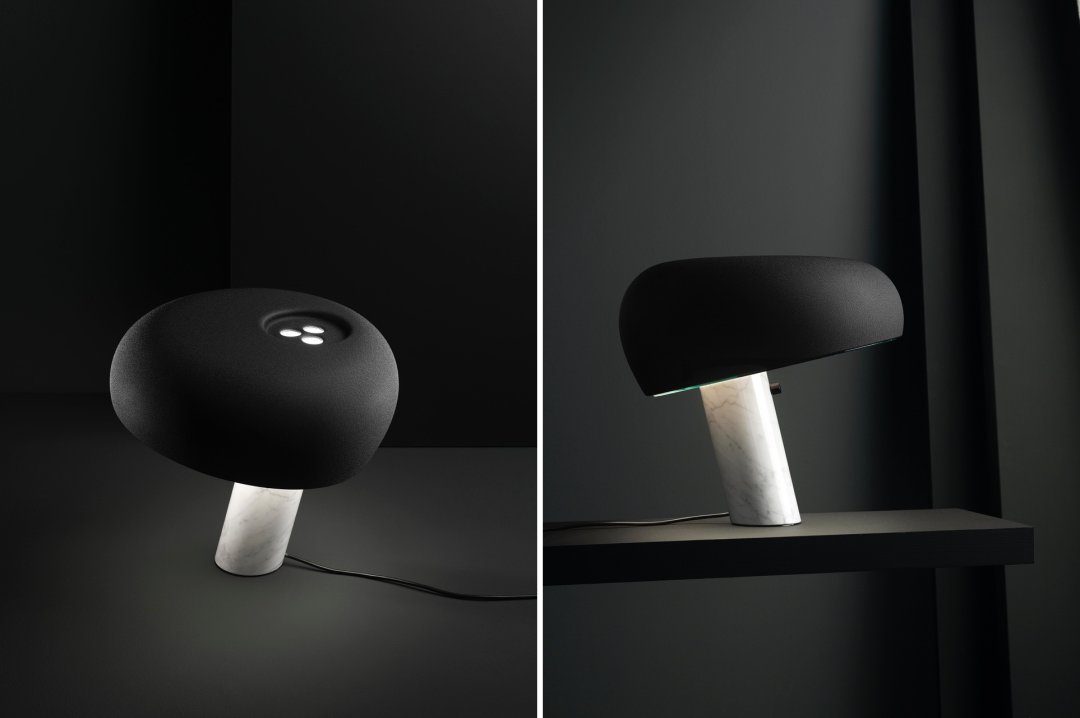 Aesthetically, the only noticeable change is the matte black surface of the snout shaped reflector. Originally released in a glossy black, the slightly textured matte finish is sure to win over design enthusiasts and experts alike. The new version also features a high-tech touch sensor dimmer. Finally, a holographic label certifies each lamp’s authenticity and reveals its identifying number.

When you take a look at Snoopy’s personality, it’s easy to see why the Castiglioni brothers were inspired to create the Snoopy Lamp. A charming character with an elaborate and inventive fantasy world, Snoopy’s sense of adventure and imagination complements the brothers’ own creativity.

Personally, I really like angular look of the design and how it appears to be performing a balancing act. The eye-catching design and sleek materials call for a prominent place in any room. While placing it on a desk is an obvious choice, I think the Snoopy Lamp would also be a perfect choice to place by the bed on a nightstand.

Snoopy is just one example of how Achille Castiglioni and his brother Pier Giacomo were true innovators in modern design. With several designs in the permanent collections of museums, Achillle truly strove to understand his reason for creating or improving an existing product. The end results of each of his designs began with one of his mottoes, “Design demands observation.” It was that observation that gave so many of his designs their unique and humorous qualities.

Nicole is the Home Décor Site Merchandiser at YDesign Group. She is obsessed with great design in all forms with a special love for jewelry, wine bottle labels, and tableware. When she’s not exploring the many museums and art galleries of the Bay Area, Nicole spends time looking for and visiting obscure and unusual destinations (locally and abroad) while practicing her photography skills.