Written in the Stars: Constellation from SONNEMAN

Robert Sonneman, creative visionary of SONNEMAN – A Way of Light, gives us an inside look into the 2018 Constellation collection, his latest foray in LED lighting. 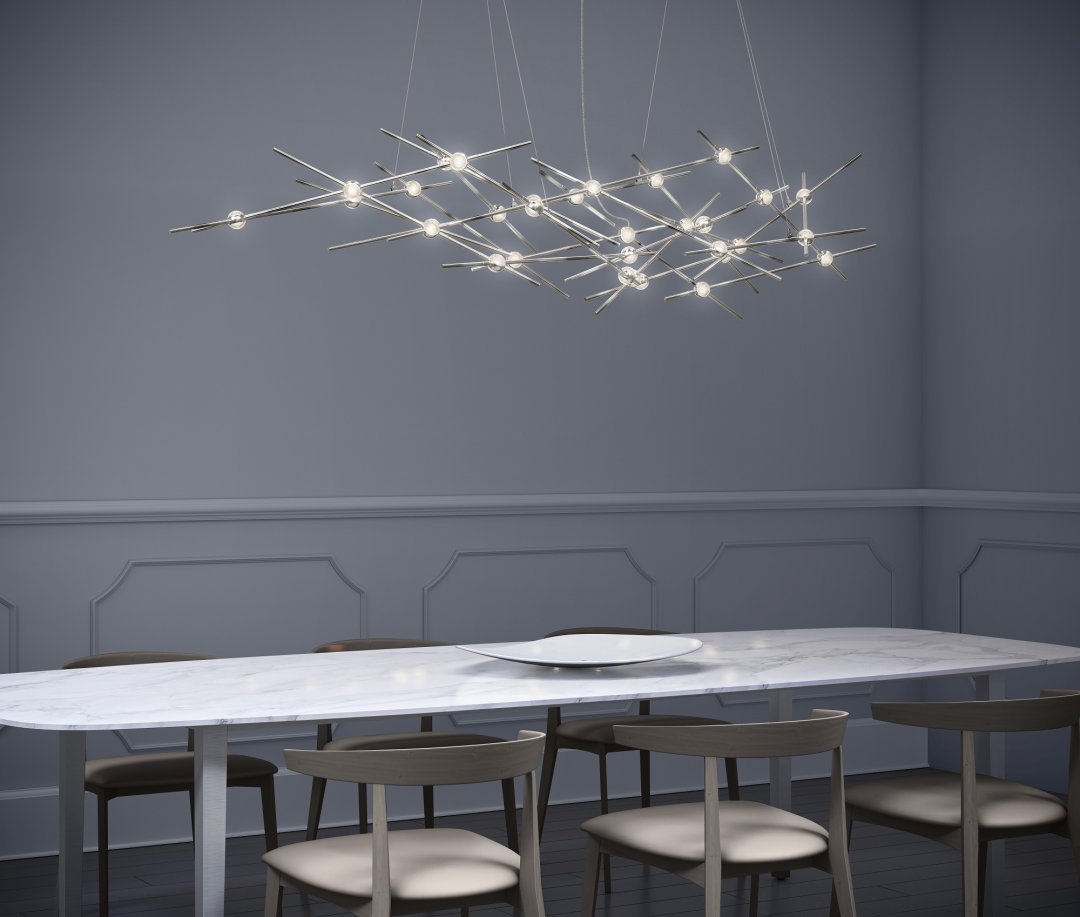 The name Constellation is obviously associated with outer space. Do you have a personal interest in astronomy or was the naming convention determined after the conception of the product?

Constellation started as a series of studies of interacting rods in various compositions. The points of intersection became not only the points of connection but also the opportune locations to integrate an illuminating source. As we built various configurations–connecting them in fixed relationships to each other–the metaphor of a constellation became obvious. It was at that point that we referred to a map of the stars and could clearly identify that stars in a fixed relationship with each other are in fact constellations. The naming was revealed naturally from the celestial vision. 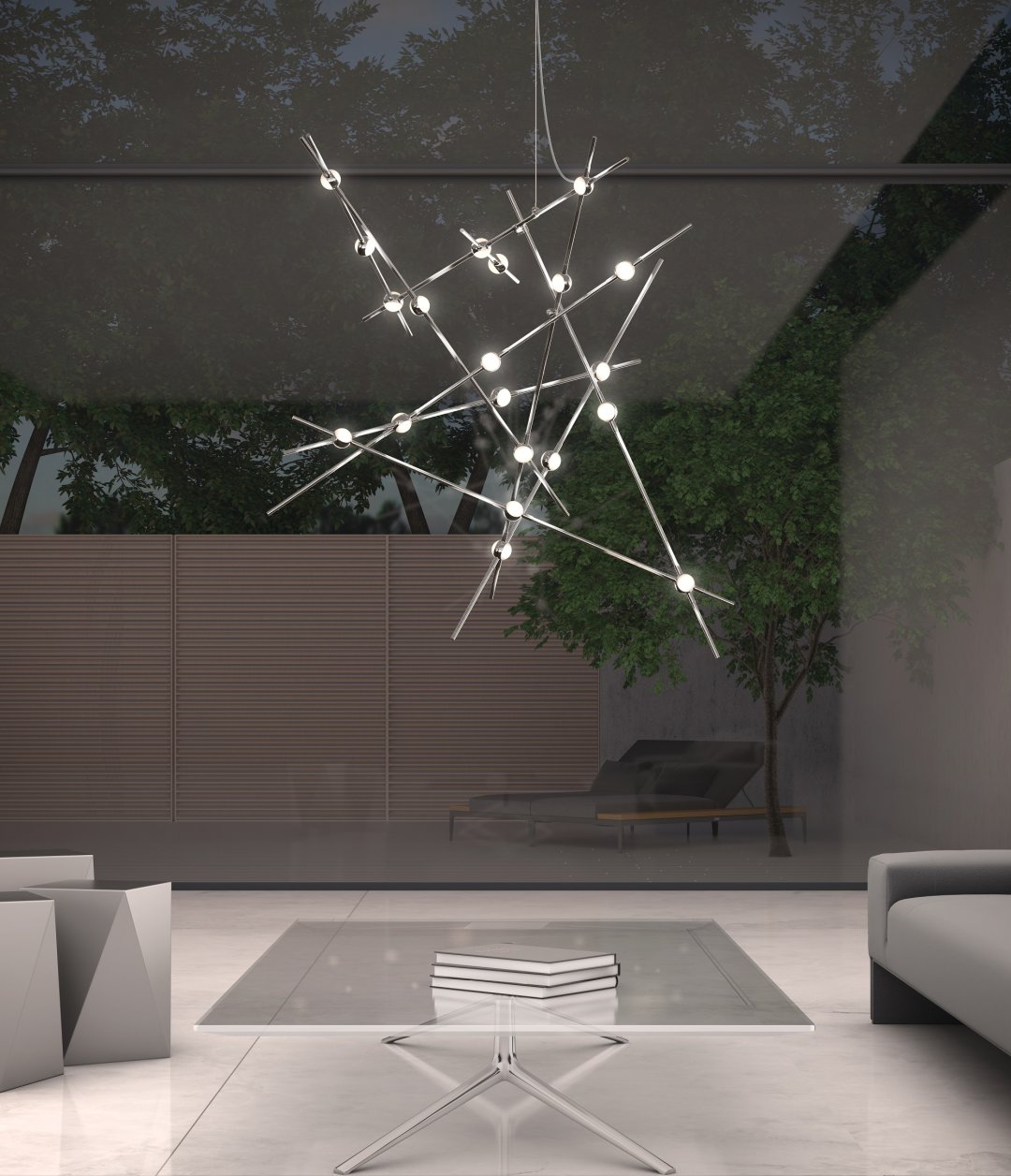 With 88 officially recognized constellations, how did you select those chosen: Ursa Major, Ursa Minor, Aquila Major, and Aquila Minor?

More romance than science, we chose names for the configurations because they hint at the actual star formation and because we like the way the sound of the name fits with our compositions.  How could we resist the expanse of Ursa Major or the mythology of Aquila’s eagle carrying the thunderbolts of Zeus? 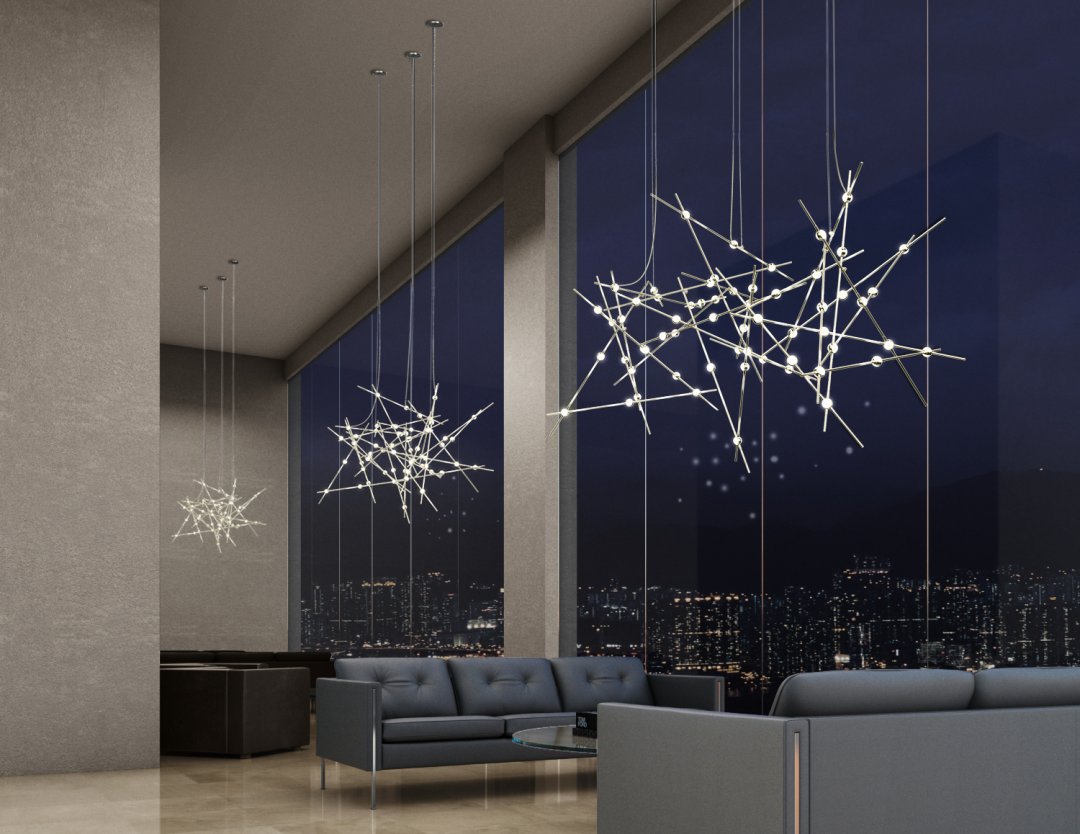 Could the available preconfigured options be combined to form another constellation?

Yes, preconfigured configurations can definitely be combined to form larger groups of celestial-like configurations. Examples are shown on our website and in our catalog: combining two Ursa Majors to form an Ursa Major II doubly large or Ursa Major III, IV, or V to achieve infinite lengths.

Additionally, the Aquila can be clustered with any number of fixtures to form expansive, incredibly exciting, sculptural compositions such as the composition of three Aquilas. We also will design and configure additional custom installations as may be required for a specific site or uniquely desired by a designer or architect.

The shapes seen when looking at constellations are dependent upon a person’s point of view. Can the same be said about these products?

Constellation is a celestial sculpture, and by definition, sculpture is intended to be viewed from different angles in varying positions. Constellations are dramatically impactful sculptures that are increasingly interesting as you move around them, altering your viewing angle and gaining new insights into the dramatic interplay of its elements and lights. 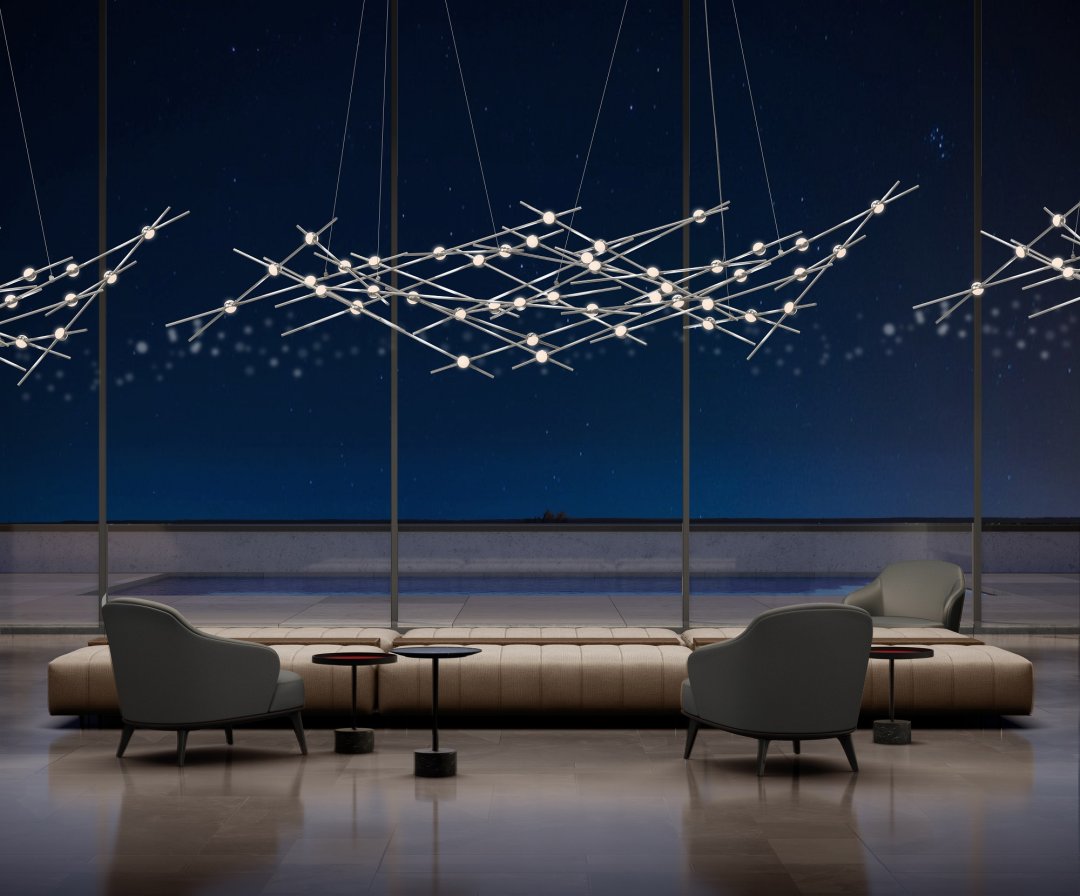 In 2016, SONNEMAN introduced Suspenders, which represented your first launch of system-based LED architectural lighting. All subsequent releases have continued to explore systems. Do you envision systems as the future of lighting?

Envisioning architectural applications for expansive systems is an incredibly interesting and challenging approach to gaining advantage from electronic illumination technology. It is an approach that allows us to reimagine the form, shape, and application of lighting in an increasingly electronic-based environment.

What did you learn from Suspenders that you integrated into this product launch?

The Suspenders experience enabled us to deploy technology to enhance and expand the utility and limitless scalability of system-based illumination. Freed from the limiting restrictions of heavy electrical components, we now see our lighting designs as an architecture of structural art with the potential for multiple configurations, infinite expandability and a variety of luminaire possibilities. Constellation, Votives, and Intervals are three new scalable architectural lighting systems that we introduced this year (and available soon for purchase).

While the system lends itself to custom capabilities, Constellation can simply be hung in multiples that blend seamlessly, as exhibited in your showroom at Dallas Lightovation in January. Do you have plans to expand the offerings?

As new series are used in projects, we often discover new applications and utility for some products. Constellation is so vast in terms of its scalability and utility that I am sure we will discover new ways to apply its structure to expanded forms and applications. We tend to focus on what’s next, using the lessons we learn from prior experiences. We rarely look back to expand existing series, although it has happened.

You have an amazing talent for making complicated things appear simplistic. Is this an inherent approach in your design philosophy?

My rule is always to simplify, simplify, simplify. And when you’re all done, simplify it again. Great design reduces complexity to its most minimal state to achieve the intended functionality. System-based design relies on the principal of building core modules of repeated components to reduce complexity. If it becomes too complicated, it’s generally not good design; so just move on to another approach or to something else, because overworking it rarely works. Seek the essence of the vision, and discard the rest.

Constellation is comprised of three basic components: LED hubs, connecting arms, and cable ceiling hangers that are assembled in the field. Does the design brief factor for assembly, or is this determined based on the final product?

Constellation was designed to be assembled into precise arrangements that, combined with others, form fixture configurations. Planning for the suspending of these complex compositions became a challenging task, which we ultimately solved with a simple tri-wire approach that once installed provides stability to the orientation of the composition.

The hanging method evolved through a great deal of trial and error and through a lot of experimentation. It was not part of the original design brief. Rather, it emerged from the design development process as critical to maintaining Constellation’s stunning celestial shape.

Can you take us through the technology involved with the LED hubs?

Each hub is a complete LED light engine, using two arrays of seven LED diodes on each side for a total of 14 LED diodes in each hub. The driver circuitry on each of the two faces of the hub has an individual driver to control constant current, which is supplied by its remote drive providing constant voltage.

Each of 15 sizes of connecting arms form a structural and electrical connection between the hubs. The hubs can revolve around the connecting arms to alter the orientation of the illumination. The configuration is powered by a special power feed hub connected to a ceiling power supply.

We are partial to the clear faceted acrylic lens. Do you have a favorite of the two available lens options?

My preferred lens option is always dependent upon the environment in which the Constellation will be hung. But the dazzling faceted lenses most glorify the celestial design intent.

Ready to bring some starry modern lighting into your space? Then be sure to check out the SONNEMAN Constellation collection, available exclusively at YLighting.